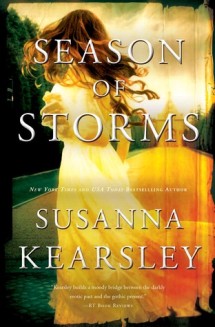 Today, we are celebrating the re-release of Susanna’s novel Season of Storms. It has been out of print in the US for over a decade, but (mercifully) Sourcebooks has been re-releasing several of her older titles with beautifully redesigned cover art to match her newer books. The Splendour Falls had its re-release back in January, and I’m hoping Named of the Dragon will have its turn sometime in the near future…

I owe Lauren Willig a great big thank you for introducing me to Susanna Kearsley’s books. Lauren frequently mentions Susanna on her Weekly Reading Round-ups or If You Like lists. After seeing Susanna’s name pop up repeatedly, I finally decided to give her a try, and now I recommend her books to anyone who will listen. I have read almost all of them, and every single one has been good, but my absolute favorite is The Winter Sea.

Here is what Sourcebooks has to say about Season of Storms:

In the early 1900s, in the elegant, isolated villa Il Piacere, the playwright Galeazzo D’Ascanio lived for Celia Sands. She was his muse and his mistress, his most enduring obsession. And she was the inspiration for his most stunning and original play. But the night before she was to take the stage in the leading role, Celia disappeared.

Now, decades later, in a theatre on the grounds of Il Piacere, Alessandro D’Ascanio is preparing to stage the first performance of his grandfather’s masterpiece. A promising young actress – who shares Celia Sands’ name, but not her blood – has agreed to star. She is instantly drawn to the mysteries surrounding the play – and to her compelling, compassionate employer. And even though she knows she should let the past go, in the dark – in her dreams – it comes back.

If you’ve never tried one of Susanna’s books, head over to her website, where you can read the first chapter of each of her books for free!  Also, Susanna tweeted a link to a Pinterest board of pictures for Season of Storms earlier today – check it out!  I love it when authors share photos that inspire their work.